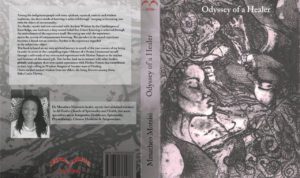 Everything that happens serves a divine purpose and it orchestrated from above. It happens because it destined to happen. There are no co-incidents nor there are mistakes. All that manifest itself in the physical has its origin in spirit. The wheel of life is an endless journey of illumination always rising and falling. It is extremely challenging and yet transformative; at its climax, the moment of bliss is attained through union with the Transcendent Self.
In this deeply structured spiritual book, Dr Motsisi takes us through the journey of her life in such an overwhelming way.
Find the healing of your inner-self carefully hidden in the intricate woven tapestry of the book: Odyssey of a Healer.

Odyssey of the Healer. Encouraged by the cover art by artist Dineo Seshee Bopape, I bought this book on Amazon Kindle. But after I had read the first few pages, I put it down. A month later, I’ve picked it up again and am engrossed in a true but fantastical story of Motsisi, a doctor and sangoma (diviner) who shares the details of how she came to be the spiritual sage that she is. I was not ready when I picked up the book the first time, in the sense that I wasn’t open to hearing some of what is written in the book. Motsisi reveals aspects of her soul’s journey and approaches the large questions of life in ways that I’m familiar with. The difference is she locates these questions in Africa, writes about them in isiZulu and isiXhosa and Sesotho and English. This is a physical embodiment of the importance of archiving and documenting indigenous knowledge systems for modern Africans. (Editor: Milisuthando Bongela)

From the Inside Flap

Initiation through Nature
A seed is useless and impotent unless it is put in its appropriate matrix.
(Rosicrucian Axiom)[i]

From the Back Cover

Among the Indigenous people & many spiritual, mystical, esoteric traditions, the direct mode of knowing is achieved through “merging or becoming one with the object of intentionality.” As a healer, mystic and one entrusted with Ancient Wisdom by the Gatekeepers of Knowledge, one harbours a deep rooted belief that Direct Knowing is achieved through embodiment of the experience itself. Becoming one with the experience opens the avenue of compassionate knowing. The partaker of the experience becomes a friend not an intruder. Neither is the experience regarded as the subject nor object.

This book is based on my own spiritual journey in search of the true Essence of my being. In order to arrive at this compelling topic: “Odyssey of a Healer”, I immersed myself through a self-study of my own sacred experiences with Mother Nature as the Teacher & Bestower of this sacred gift. This further led me to interact with other Healers globally & capture their own sacred experiences with Mother Nature that contributed to their high calling as Wisdom Keepers of Ancient Ways of Healing.

She has travelled extensively participating in Healing Practices & Rituals of Indigenous People of the World in Nepal, India, China, Africa, including the Native Americans in the USA. The conception of the book: Odyssey of a Healer was as result of her Unpublished Dissertation on the ‘Healing Power of Nature’ based on her spiritual journey and the experiences of other healers, she has interacted with during her many travels. It was an intense study that spanned over a period of 10 years. She runs her Holistic Practice located in Johannesburg. She has developed a sympathetic understanding of the needs and problems of those entrusted under her care.