ODYSSEY OF A HEALER 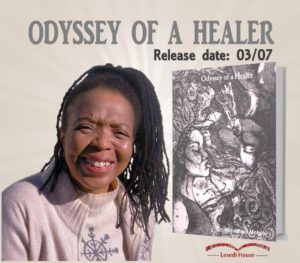 Among the Indigenous people and many spiritual, mystical, esoteric traditions, the direct mode of knowing is achieved through “merging or becoming one with the object of intentionality.”
As a healer, mystic and one entrusted with Ancient Wisdom by the Gatekeepers of Knowledge, one harbours a deep rooted belief that Direct Knowing is achieved through embodiment of the experience itself. Becoming one with the experience opens the avenue of compassionate knowing. The partake of the experience becomes a Friend not an Intruder. Neither is the experience regarded as the Subject nor Object
This book is based on my own spiritual journey in search of the true essence of my being. In order to arrive at this compelling topic, Odyssey of a Healer, I immersed myself through a self-study of my own sacred experiences with Mother Nature as the Teacher and Bestower of this sacred gift.
This further led me to interact with other healers globally and capture their own sacred experiences with Mother Nature that contributed to their high calling as wisdom keepers of Ancient ways of knowing.

The book is divided into two sections: the first part captures my own spiritual pilgrimage. I have participated in healing practices and rituals of Indigenous People of the World in Nepal, India, China, Africa and the United States of America with the Native Americans. It was during this period I discovered and lived the other initiations, noted the existing differences and similarities, furthermore broaden my scope of understanding. The initiation of chosen individuals into the ‘secrets of the gods’ is an ancient concept that marked by the beginning of Priesthood and the lineages of mediators between the gods and the people. It evolved further into establishment of secret societies for the preservation of knowledge of the ancient mysteries. The Mysteries were devoted to instructing man concerning the operation of divine law in the terrestrial sphere. The seeker of Truth is the great traveller, for Truth is not written in black and white. The African proverbs state, a child who has never left home says, “My mother is the best cook”, while the child who travels far excels the elder of old time. 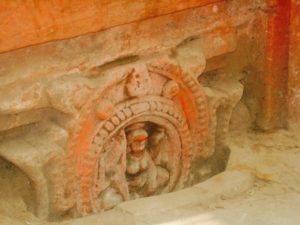 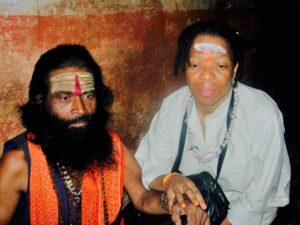 During these initiations with other healers /mystics /seers, I merged with them deeply at a soul level. We blended uniformly with the etheric realms in order to access and decode knowledge of the Ancient Ones.

The mystical experiences during these initiations weaved a pattern that redirected me to the road less travelled as the seeker of Truth. I was simultaneously awakened to past life connections and the significance of the incarnation of my soul into the world of form. There was raised state of consciousness propelled by the unleashed the serpent within.

The second part is based on the stories of other healers/mystics/seers/shamans. The primary focal point was in the ways they have lived their experiences in communion with Mother Nature. The Great Mother of All, the awakener that rekindles the powers that lie within. From my early childhood, I felt there was more to this life beyond the programmed avenues of education and religion. The awakening was achieved through deliberate submersion of self in experiences that prompted me pursue a lonely journey in order to decipher the significance of these experiences. Every experience was sacred though its deeper meaning was covered by cobwebs.

At that point of searching for essence of the experience, absolutely everything was relevant including spirit beings (beings in other dimensions) that contributed in making the experience a journey of transformation. It called upon willingness to surrender to the call of the Spirit and venture into unfamiliar territory. Given the richness of the experiences that Mother Nature makes available to us at any given moment, we constantly engage in a state of becoming. These transformative experiences shook me off my comfort zones by extending the range of my functioning in each level of my being. They lift the veil of ignorance by providing a larger paranormal view. These sacred experiences imparted awareness that there was more to this life and to the world that could not be apprehended within the narrower bands of functioning. 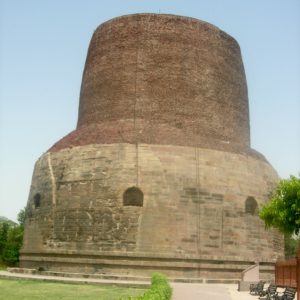 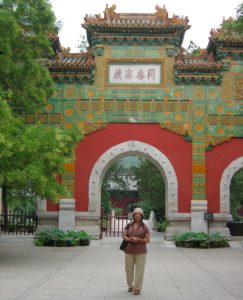 During this taxing process of self-discovery, Mother Nature became the avenue for the exploration of these mystical experiences. She awakened the quest to discover the deeper meaning contained in these experiences. I communed deeply with her, an act that cemented our relationship. I bowed at her feet in full surrender to receive her divine guidance and spiritual insight. I paid a great deal of attention to our relationship and the channels of communication and as the old adage states: “The Master arrives when the student is ready.” I was ready and willing to suck wisdom from her overflowing breasts. These priceless lessons contributed towards my spiritual enlightenment that culminated into a ‘sacred union’ with the Great Mother of All. During this period of deep communion I experienced a heightened state of consciousness. She reminded me of the Truth deeply embedded in my soul. She was my foundation and source of inspiration. Her words of wisdom echo at the core of my being: “You are a Being of Light, an Embodiment of Love, and an Incarnation of Truth.” 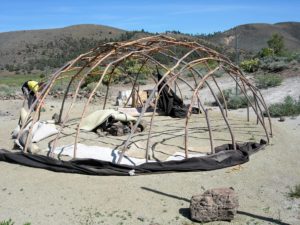 During this transmission with the Great Mother, I paid special attention to the dreams, visions and to inner reflections that so often shed light on my path when the intellect proved itself limited as a guide. The soul journeys enhanced the process of knowing through becoming. It afforded me the opportunity to tap all dimensions of what was being observed. Further, through dream incubation of the experience, full attention was directed to the higher consciousness as the ‘knower’ of all mysteries. It allowed more light to be shed upon the unknown. The rich worlds revealed to me by the Great Mother and the Ancient Ones- my relations in the spirit world- provided valuable spiritual insight that contributed immensely in watering the germinating seeds that gave birth to this book. In collaboration with the Great Mother, they brought into my awareness that the unfolding work in the physical realm had been sealed in the spiritual realms eons ago. The birth canal for its manifestation had been paved by the custodians of ancient knowledge.

The lengthy immersion in the topic brought a compelling spiritual insight that shed light in my role as a mouthpiece for the voiceless spirit. It challenged the beliefs that were ingrained in me through upbringing, culture, religion and education. I found myself as an empty vessel on a quest searching for that deeply embedded Truth. In that void, the veils of illusion were shattered, making way for Truth that surpassed all understanding to make itself known and expand on the nature of reality that transcended the intellect. 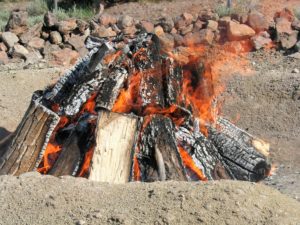 The ancient belief that the Gate Keepers of Knowledge had to be honoured was adhered to during the transmission of information. The Ancient Ones, my relations in spirit known instructed me to remain truthful to the voice of destiny that brought me into life. I was informed that the greatest sin that could be committed by the custodian of transcendental knowledge was to impart it or speak of its inner secrets to those who are not ready to receive them. Often those mysteries are profound and incomprehensible, their potency necessitates that they be revealed with safety to those who have consecrated their lives to the unselfish service of humanity.

The ancient secret societies bound their initiates to inviolable secrecy; betrayal of their trust was avenged with death. This measure was adopted in order to ensure that the fountain of that doctrine was never revealed to the profane. In order to serve humanity and All Beings, the floodgates of the living waters must be opened from our lower sacral chakra, the primal source of consciousness. As they ascend swiftly to the upper chakras they are balanced by love and compassion, channeled through the heart.

The symbolic language of Nature is unfathomable and inscrutable to the ignorant. It is a meta-language associated with mysticism, governed by universal law and indomitable power that diversify in its manifestation. Mystics of antiquity realized the limitations of language in communicating their sacred experiences, relied in symbolism. The narrated sacred experiences have been presented in the form of stories, poetic expressions, analogues, metaphors, symbols and imagery. I opted for this mode of expression because it provided the possibilities of communicating complexities and entireties of experience that could not be matched readily by ordinary descriptive language.

The Western scholars, in their studies of practices of Indigenous people, employed the limiting conventional approach based on dualism. It only dealt with the narrow band of the spectrum of possibilities the Dualistic Paradigm rooted in fragmentation of components. This futile school of thought cannot be employed to decipher the symbolic language of Nature. Reality has no divisions; it unravels itself in its wholeness. Divisions limit our conception and imagination. We are in constant flux of becoming and in need of a New Paradigm. The old mechanistic Newtonian and Cartesian paradigm has led modern society to an alienation from, if not a total destruction of Nature. Among the indigenous people and many spiritual, mystical, esoteric and wisdom traditions, the direct mode of knowing is achieved through merging or becoming one with the object of intentionally. This kind of knowing and seeing is captured in the poem:

To look at Any Thing by Moffit.

To look at anything
If you would know that thing,
You must look at it long
To look at this green and say
“I have seen spring in these:
“Woods” will not do – you must
Be the thing you see.
You must be the dark snakes of
Stems and ferny plumes of leaves
You must enter in
To the small silences between the leaves.
You must take your time

And touch the very place they issue from.

The Ancient Ones have spoken to humanity in many unsaid ways in attempt to awaken us and they continue to speak. The question is: Are we ready to receive their unfathomable message? Maybe we need to do a deep soul-searching to decipher their words of wisdom.

Baba Credo Mutwa affirms:
A man who lives with his soul and who lets his soul, rather than his brain, guide him, is better equipped to face the mysterious and supernatural things, because the soul understands these things while they bewilder the brain. The brain drags them into the quicksand of materialism.

The Book: Odyssey of a Healer, available on Amazon.com:https://www.amazon.com/author/mmatheomotsisi