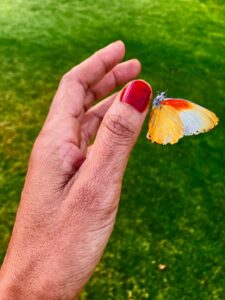 Mediation is the creative art of harmonious conflict resolution and restoration of human relations while dissolving barriers. A gateway towards transformation and reconciliation rooted on preservation of Human Dignity and Trust.

The Butterfly is a classic example of Transformation. We are inspired when we see the freedom and delicate beauty that emerges from arduous of growth and development. Butterflies are a reminder that all stages of life are to be valued. In its journey, the butterfly teaches us to trust that which is not yet fully formed as direct reflection of our level growth and transformation.

Ubuntu: The Primeval Model of Transformation

Mediation is a way of returning us to a selfless state of existence that honours the spirit of Ubuntu which is deeply ingrained in our matrix. In the process of our human evolution and technological advancement, we have drifted away from that which truly defines our humanness and interconnectedness. As we access the field of remembrance of ancient ways of being and knowing, we collective awaken to effective ways that have been practiced by our forebearers in antiquity. The deeply embedded truth that Ubuntu is the first step to conflict transformation which has always honoured our state of Oneness and it is deeply rooted in preservation of human dignity.

Ubuntu as the Primeval Model of Transformation seeks to promote unconditional kindness to all life, including ones’ own, commonly referred to as compassion. A valuable quality employed in facilitative mediation which promotes genuine trust and openness. There is little of significance in our human endeavor which can be achieved without compassion. Ultimate healing that pierces through emotional barriers requires the invocation of the power of compassion both for self and the other. David Hawkins a renowned lecturer and expert on mental process expand as follows:

We may observe how throughout history, society has tried to “treat” social problems by legislative action, warfare, market manipulation, laws, and prohibitions-all manifestations of force – only to see these problems persist or recur despite treatment.  Although governments (or individuals) proceeding from position of force are myopic, to the sensitive observer it eventually becomes obvious that conditions of social conflict won’t disappear until the underlying origins have been exposed and “healed.”[1]

During this Aquarian Age, the spirit of Ubuntu is finally been resurrected within humankind. It transcends all created classification that categories humans based on race, creed, nation, religious and political afflictions, the list is endless. Its resurrection creates a paradigm shift both at individual and collective consciousness. We find ourselves in situations where many structures need to revisit their structural model of operations. The need to shed off the ideologies that no longer serve humanity at large. Ubuntu, a solid foundation that cannot be easily eroded strives to restore broken relationships. This is achieved through affording individuals the priceless opportunity to undergo the nature of healing that returns them to their state of wholeness. Thus, mending the broken emotional fibre that is often neglected in other approaches of conflict resolution e.g., litigation and arbitration.

Reconciliation begins with oneself and calls for deep introspection, the foundational stone of Ubuntu which is replicated wisely in mediation process i.e., seeing self through the eyes of the other. A principle clearly understood by the Indigenous People, the Native Americans have always affirmed that in order to understand what the other is going through you have to wear their moccasins. The notion of knowing through becoming is an ancient concept and a natural way that unlocks the gateway of discernment in order to decipher the hidden or unspoken. This mode of direct knowing is achieved through merging or becoming one with object of intentionality. Augustine Shuttle shares the same sentiments that “I only become fully human to the extend that I am included in relationship with others.” [2]

This is a view shared by Archbishop Desmond Tutu that “A person is a person through other people”.[3] Thus, highlighting the indisputable fact that though we exist as individuals, we are interconnected and dependant on each other. There exists an invisible cohesive bond that binds us all. A unifying factor that is capable of breaking through all barriers.

The Great Father of the Rainbow Nation, Nelson Rolihlahla Mandela a visionary elder ahead of his contemporaries realized that diversity should not be a source of conflict and separation, it should amplify the multifaceted beauty and infinite creativity just like the Rainbow. The colour in a rainbow is a vibrational effect involving light and matter, and its full spectrum of colour forever reminds us of our own many and varied facets. It is known that the rainbow’s colors only appear when white light is refracted into its separate wavelength. This serves as reminder that we are all work in progress, as we strive for wholeness and clarity in our fragmented vibrational field. A principle ingrained in Ubuntu that as humanity we have all emerged from the primal Tree of Life that birthed all in existence. The Honourable Father affectionately seeded these wise words to the Rainbow Nation in an effort to facilitate healing and promote reconciliation:

“Ubuntu…asserts that the common ground of our humanity is greater and more enduring than the differences that divides us. It is so, and must be so, because we share the same fateful human condition. We are creature of blood and bone, idealism and suffering. Though we differ across cultures and faiths, and though history has divided rich from poor, free from unfree, powerful from powerless and race from race, we are still all branches on the same tree of humanity”.[4]

The intense Mediation Course under Mediation in Motion in collaboration with University of Cape Town has greatly contributed igniting the burning flame of the spirit of Ubuntu at the core of my being. It served as a reminder not to stray away from that which defines me as human though perceived as an individual and yet integral part of the Whole. In this spaceship called Earth, we are here on a divine mission to birth change through meaningful self-exploration and interaction with all that around us.  Therefore, being mindful is a prerequisite as the architect of the reality we want to manifest in the world of form through collaborative efforts with others.

I have arrived at the decision that the highlighted qualities and skills that were recommended to be employed by a mediators discussed during the course were actually the solid foundation upon which Ubuntu is built. Just to mention few, the depth understanding of the source of conflict, the application of sensitivity when dealing with variable personality types and cultural diversity, the importance of good listening skills and recognition of non-verbal communication, the genuine cultivation of trust and harnessing of patience, the refrainment from inducing harm and coercing of parties, the importance of remaining neutral and impartial during facilitative mediation process.

In honour of the humanness within each one of us that calls for allowing one to be compassionate and empathetic during interaction with parties, the importance of honoring of human dignity and addressing the emotional issues positively including soliciting for apologies to be rendered where it is deemed appropriate in an effort to facilitate healing and transparency.  Finally, the realization that the mediator as the facilitator of the process should adhere to confidentiality as the life support of the mediation process. Their primal focus should be the needs, interest and concerns of the parties during the collaborative – explorative phase of mediation. This has an empowering effect on the parties as it unleashes the infinite potential from within to sincerely work toward a beneficial win-win solutions instead of win-lose which has been the trend with adversarial conflict resolution approaches e.g., litigation. The cornerstone that drives successful facilitative mediation is achieved through creation of sacred space that allows parties to lower their guard, expose their vulnerability without shame nor fear of judgement.

I want to conclude this section by affirming that the realization of the role of the spirit of Ubuntu as the primal foundation for conflict transformation sets a conducive environment for mediation process. Seeing oneself through kaleidoscope of the spirit of Ubuntu is a dynamic state of being. The mediator is empowered with the tenacity and patience to flow with this artful creative process, knowing that surprising outcomes can spring to life in what seems like impossible situations.

Mediation process that is rooted in spirit of Ubuntu should be woven in the fabric of humanity if we truly aspire to return to a state of harmonious conflict resolution that honours human dignity beyond colour, creed, race and nationality etc. I envisage incorporating this refined ancient skill in my personal life as an elder in the community, in professional engagements as a medicolegal expert and health practitioner (healer). Furthermore, in the spiritual pursuit with others as I partake with them in their sacred transformational journey of awakening to the deep knowingness that they are spiritual beings having a physical experience not the other way around.

The facilitative mediation as an umbrella does not only generate peace, but it is also the healing balm that restores broken human relations, thus achieving reconciliation at multiple levels. This is because a mediator rooted in Ubuntu will engage the process more openly, objectively, and humanly while harbouring a deep understanding that no one is an island. The empowerment dawns upon recognition that the one perceived as the enemy is after all human to begin with that harbours deep emotions, values, and viewpoints in the same manner as one does.

Finally, I believe harmonious ways of conflict resolution anchored in the spirit of Ubuntu as explored during this Mediation Training should be made available even at an elementary stage of human development. It is imperative that humanity to return to that which defines their humanness for cultivation of peace and universal brotherhood. This collective awakening will serve as the barometer that will raise an awareness of the need to honour self through the other, our interconnectedness and the invisible fibre that binds us all as humankind. It will curb violation of human dignity and activities that are rooted in greed or hoarding of resources which has resulted in skyrocketed scarcity as witnessed in numerous sinking government institutions that are poorly serviced due to lack of funding and the infrastructure on critical life support.  These are multifaceted problems that require collaborative efforts in order to remedy the situations.

The moment is ripe for humanity to awaken to the spirit of Ubuntu that is lying coiled like a serpent waiting for the creative flames to be ignited so that it can rise and breakthrough the veil of illusion rooted in the Ego, a destructive beast that needs to be tamed.  There is a need for humanity to put away their individualism and greed in an effort to work collectively towards uplifting each other in love and compassion. There will not be a need to fight over resources or power as we will be mindful of each other.

Credo Mutwa, a High Sanusi and Keeper of Ancient Knowledge left these deep soul-searching words with us:

A man who lives with his soul and who lets his soul, rather than his brain, guide him, is better equipped to face the mysterious and supernatural things, because his soul understands these things while they bewilder the brain. The brain drags them into quicks and of materialism.[5]