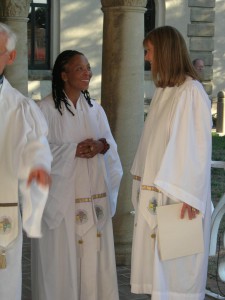 Ordained  Minister in All Faiths Church of  Spirituality and Health with  a sacred spiritual  contract to honor the Universal Consciousness and Divinity in All Beings:

“I Think, therefore I am” by Rene Descartes

For eons the programmed avenues primarily education and religion have invested insurmountable amount of energy and financial resources in a effort to teach individuals how to think. Why such great effort?

If you can learn how to think, then you will be able to serve the system in place. Oh yes, many of us have been caught up in that dream. We probably considered to be intellectuals/ academics/ scholars, all the short-lived fancy titles. The sad news is, We are Pygmies in Spirit. We have exercised our mind and enlarged our Mental capacity at the expense of our Spirituality. We have performed a traumatic surgical procedure of dividing the Mind, Body and Spirit. We all bearing those scars awaiting to be healed !

Having explored the fraternity of education as a scholar.  I am of the opinion,

“Do not teach me how to think, tell me what I need to know so that I can allow the Divinity in me to manifest and honor my path.”

Cogito, ergo sum is a Latin philosophical proposition by Rene Descartes meaning “I Think, therefore I am”

René Descartes (1596–1650) was a French philosopher and mathematician, credited as a foundational thinker in the development of Western notions of Reason and Science. His philosophy was built on the idea of radical doubt, in which nothing that is perceived or sensed is necessarily true. The only thing that remains true that there is a mind or consciousness doing the doubting and believing its perceptions, hence the famous formulation, ‘I think therefore I am’, or in Latin, the cogito—‘Cogito ergo sum’. Descartes also proposed that the Mind and Body were two separate and distinct entities. A Western Philosophy that divides the Whole into its fragments. This became my greatest challenge from early academic  to postgraduate period. The concept did not resonate with my spirit or higher consciousness. Many times, I retreated to the African Philosophy aka Ubuntu, anchored on Solid Pillar of  Holism instead of Division of the Whole

Rene Descartes notion of  “I Think, therefore I am” became the Stallion the I rode on in search for meaning or truth. We are in constant state of becoming, therefore nothing remains the same, this also applies to the mind. It is full of its own uncertainties, like everything else in the world. The body can be sensed because of the presence of the mind to interpret the relayed messages by the senses. We are Triune Beings composed of Mind, Body and Spirit and we Multidimensional in our existence. It is a ridiculous concept to ” Divide the Whole into its minute fragments.  In 1663, Descartes’ writings were placed on a list of prohibited books by the Pope, because of the central place Descartes gave to reason and mind, rather than God, in his philosophy.

A paradigm shift has to take place with regards to the notion of Fragmentation of the Whole  i.e. the Division of the Whole into its Fragments. Our reliance on our five senses only as a mode of transmission of information to the brain yields a distorted image of reality. It is a myopic view that is detrimental to our higher level of Consciousness. I have always  desired to direct my attention solely to search after Truth.

Through observation and experience, I have awakened to the realization that our senses often deceive us, while the intuition remains reliable in offering guidance or decoding information. Most of the time what we perceive through our senses is just a tip of an iceberg because in reality things are not always how they are perceived or appear. They are filtered through a blurred lens thus weaving countless illusions around the object of observation. Therefore there exist nothing really such as that presented to us.

Let us ponder on this for a moment… The very same thoughts (presentations) which we experience when awake may also be experienced when we are asleep, while at that time some or even most of them bear no resemblance to the  Truth. I supposed that all the objects (presentations) that had ever entered into my mind when awake, most of them bore no resemblance of Truth. Probably I had to go through Dark Night of the Soul, chose the road less travelled to decipher what is Divine Truth beyond what I have been taught or made to believe through dogma and indoctrination.

We suffer amnesia after incarnation, having chosen to manifest into form by occupying a physical body. We swim in the chaotic sea of illusions. As if this is not enough then we undergo brain programming through education, media with subliminal programming etc…!

Aaah, an endless struggle to awaken to the Divinity within. We endure this form of brain programming until we start questioning the authenticity of anything perceived or presented to us.

I have discovered or rather remembered that “There is nothing here New that we need to Learn, All is coded in our Matrix. We just need to access those Akashic records or remember.”

So what is Learning All About, IF THERE IS NOTHING TO LEARN…!

Learning is finding out what you already know.

Doing is demonstrating that you know

You are all Learners, Doers and Teachers

Be true to anyone else or anything else is not only impossible, but  the mark of a Fake Messiah

The simplest questions are most the most Profound.

Where were you Born? Where is your Home

Were are you Going? What are you Doing?

Think about these once in a while, and watch your answers change.

You teach best what you most need to LEARN.

You are led through your lifetime by the Inner Learning Creature

The playful Spiritual being that is your real Self

Don’t turn away from possible futures before you’re certain you do not have anything to learn from them.

It is through personal experience and observation during dream state, meditative state the information gathered is filtered from a Pure Source, the Universal Consciousness. There is clarity in the decoded message, it is only when the logic bring its inferences that doubt is set on motion.

I have observed this truth, “I think, therefore I am (cogito ergo sum),’ I am the author of my destiny or fate because I create my own reality through my thought. Therefore, I need not be taught how to think. I only need to be told what I need to know in order for me to make an informed decision and honor my path during this brief earthly transit.

Hence, I have concluded that I am a Consciousness having an earthly experience. A substance whose whole essence or nature partly consists of thinking, and which, that it may exist, has need of no place, nor is dependent on any material thing; so that ‘I’, that is to say, the mind by which I am what I am, is wholly distinct from the body, and is even more easily known than the latter …

Therefore, “A seed is useless and impotent unless it is put in its appropriate matrix…”(Rosicrucian Axiom)

Basically it means, “A soul cannot develop and progress without an appropriate body, because it is the physical body that furnishes the material for its development.”

I am the essence of Tao, Expressing itself in form,
I am Pure Consciousness,
I have a body, mind, and emotions, I am none of those.

Being is my deepest Self,
It is beyond name and form, It is felt as ever present,
I am ceaseless just like the vastness of the sea,