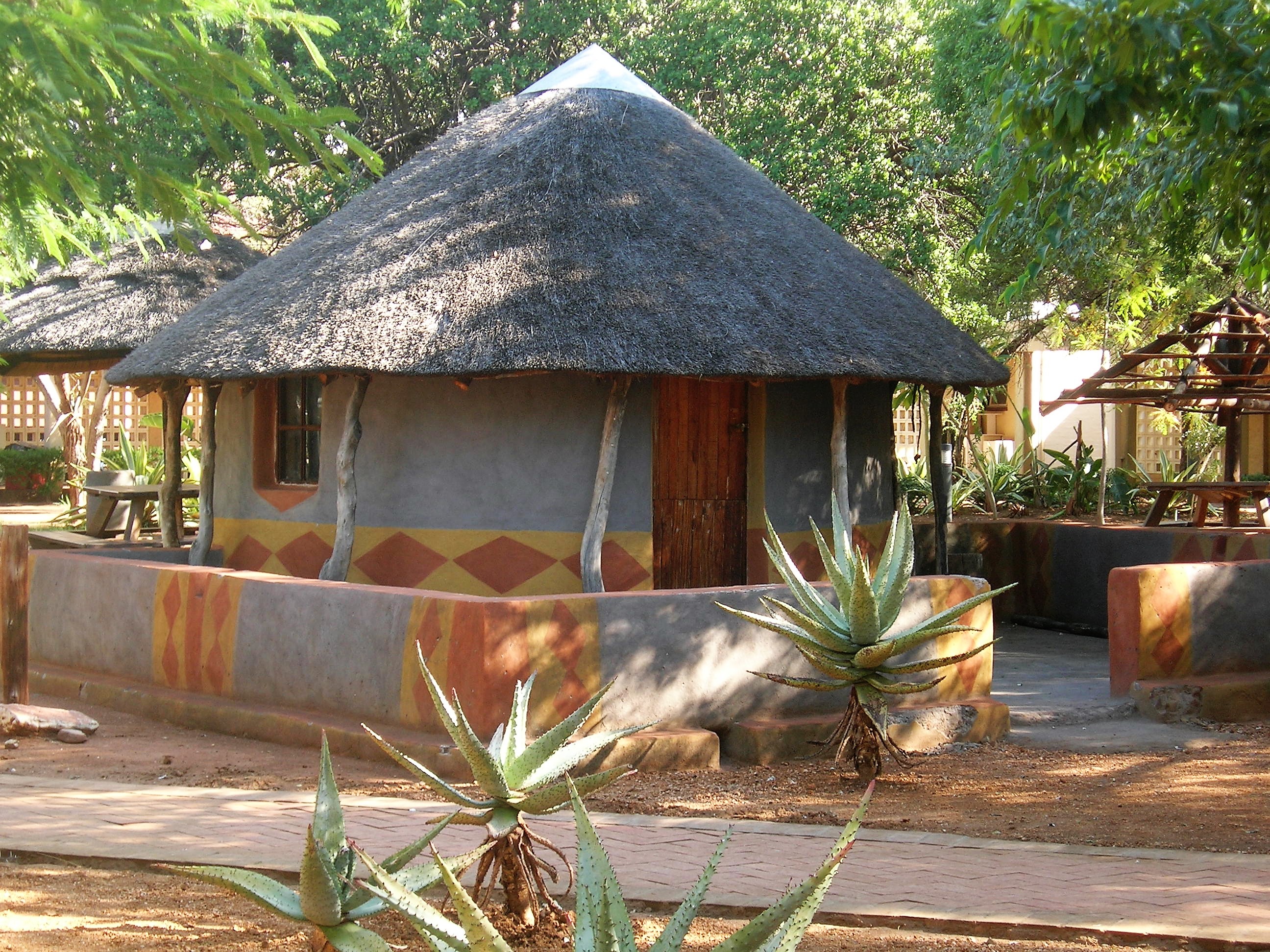 Beliefs create our reality; we are what we are because of what we think. They may be our interpretation of who we are or our interpretation of what others think of our capabilities. The beliefs that we harbor are manifested in the conscious and subconscious mind. Therefore the mind must be set free of certain beliefs that hamper enlightenment and growth before insight can occur spontaneously. Our original mind includes everything within itself, and it allows many possibilities, it is rich in self sufficient. We loose our original mind when we begin to doubt ourselves, silence the inner voice and strive to chase the wind in search for the deeper meaning of life. We create an illusion in order to satisfy our insatiable ego, believing that the answer lies outside and it is irreconcilable with our inner world. We become self-centered, our mind of compassion, and boundless thought become non-existent. 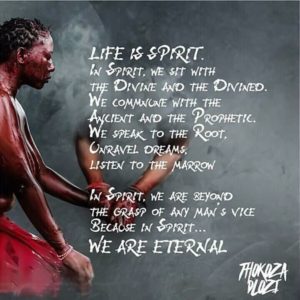 We are unable to become in sympathy with all beings thus loosing our divine nature. We are unable remain truthful to our self; therefore we hurt our selves and every being that cross our path. The emptiness in us is reflected in every being that interact with us because we are all one. Beautifully captured in the Spirit of Ubuntu, “Motho ke motho ka batho ba bangwe”, “Umuntu ngumuntu ngabantu”. In a nutshell it means, We are what we are through others. Ubuntu, a Bantu word, defines what it means to be truly human. We affirm our humanity when we acknowledge that of others. It is a traditional African philosophy that offers us an understanding of ourselves in relation with the world.

Teachings of the Ancient Ones passed on from generation to generation are ingrained in Us. We know that Life is Spirit.

A man  who lives with his Soul and let his Soul rather than his brain, guide him, is better equipped to face the mysterious and supernatural things, because the Soul understands these things while they bewilder the brain. The brain drags them into the quicksand of materialism. – Baba Credo Mutwa

Ubuntu is poetically expressed in our Greetings,

“SAWUBONA’ meaning “We See You” 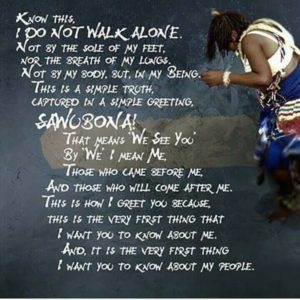 Sawubona – We See You

By “We” it means those Who came before Us and those who will come after Us.

We harbor deeper understanding that We do not walk Alone

Not by the Soles of our Feet

Nor the Breath of our Lungs

We accompanied by an entourage in Spirit

All is  intricately woven in Us by the Ancient Ones, the Masters of Water

The say, “We dance for everything”

Perhaps it is because everything is Love, the Divine Power!

We are of Love, Light and Truth

We dance to revive the spirit of Love, Light and Truth

Because who we are was taken from Us, Spirits broken, Bodies enslaved

Or it raises us to the very peak of elation.

UBUNTU is fueled by the Spirit of Oneness. Therefore the notion of Separation or Divisions is an alien concept, for Oneness knows no Separation.There exists a common bond between us all and it is through this bond, through our interaction with our fellow human beings, that we discover our own human qualities. We believe that Time is the great river that flows into its own source in a huge circle. The oldest symbol of Time or Life in Africa is a Mamba or Python biting its own tail. We believe in the transmigration of the Soul, the Soul passes through a series of developmental  stages long before and long after its brief association with human body.

Indeed, “We do not Walk Alone.”

Prof. Herbert Vilakazi, an avid scholar of sociology and anthropology, a herbalist knowledgeable in ancient ways of healing and serpent wisdom gave a comprehensive overview on Ubuntu

This was first noted during the Neolithic, alongside waterways and rivers. Specialized labour and functions emerged in cities, such as artisans, the clergy, clerks, government servants, later intellectuals. (Mann, M., The Sources of Social Power: Volume 1: A History of Power from the Beginning to A. D. 1760, Cambridge, Cambridge University Press, 1986).
It is during this stage in the development of social structure that “Thought” seems to detach itself from “Practice”, that “Thought” at first glance seems to take a direction of its own, independent of, distinct from Practical Life. It is during this stage that there emerges a specialization of knowledge called “philosophy”, and a category of intellectual labour called “philosophers”. Sooner or later, a debate emerged among philosophers: the question was: are ideas, philosophies, the Spirit, and emotions, a more or less correct reflection of people’s interaction with the material world; or do ideas, philosophies, Spirit, and emotions exist first and thereafter shape the material world and the interaction of people with the material world, including nature?

Ubuntu and The Four Agreements

Nothing others do is because of you. What others say and do is a projection of their own reality,their own dreams. When you are immune to their opinions and actions of others, you won’t be the victim of needless suffering.

Find the Courage to ask questions and to express what you really want. Communicate with others as clearly as you can to avoid misunderstandings, sadness, and drama. With just this one agreement, you can competely transform your life.

Your best is going to change from moment to moment;  it will be different when you are healthy as opposed to sick. Under any circumstance, simply do your best, and you will avoid self-judgement, self-abuse, and regret.

The sources of self-limiting beliefs that robs us of joy and create needless suffering are borne from our distorted, fragmented mind. We need to remember that we mirror each other, unfortunately most of us are sleepwalkers and we have lost the dreams that keep the heart pulsating. Yes, we can be without time and money, but we can never be without dreams, our Eagle Flight that unravel the mysterious life. In recapturing our dreams we need to embrace the core essence that defines our divinity, elaborated in the book, The Four Agreements as a doorway to personal freedom and enlightenment. Ruizs teaching is rooted in the Spirit of Ubuntu. Based on my background; there are many ways of defining the Principle of Holism, Ubuntu. All this is done to attempt to explain something that is beyond words, its authenticity lies in experiencing it.

You can only give to others that which you made of or rather that embedded in your matrix. Knowing others is Wisdom, Knowing thyself is Enlightenment. It is through merging into state of Oneness with the God-head or  the Divinity in me that has allowed me to be a channel to propagate the Spirit of Ubuntu.  Let us remember that  we are beings because we belong. We emit emanations that speak of Wholeness, Compassion, and Healing. The words uttered out of the abundance of our heart bring healing to the soul, they are impeccable and there is underlying power that generates love and freedom.

A person with Ubuntu is welcoming, hospitable, warm and generous, willing to share. Such people are open and available to others, they understand the principle of stewardship. It  is their willingness to be vulnerable, affirming of others, unthreatened in the midst of others that enables them to serve without expecting any reward in return of their service for they understand  that the soul is enriched. They display proper self-assurance that comes from knowing that they belong in a greater whole. In this case nothing is taken personally for a person with Ubuntu knows that what others say and do is projection of their own reality, a collection of their dream. 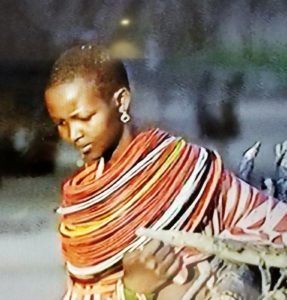 Women are the Bedrock of the Nation

The dawn of the Patriarchal era has desecrated the role of Women in the Cosmos at large.  Women are representative of the Primordial Mother that birthed All. In the Motherland Africa, the Cradle of Humankind -People of all tribes believe that, every woman on Earth is a gateway through which  spirits enter not only as babies, but also as the future. Their sacred womb like Mother Earth, nurtures the souls, which pass through the present and into the future.  In most cases, women who have awakened to the power bestowed to them as Givers and Nurturers of Life. When the Soul transforms into the spirit world, they partake in the journey with the departing soul as its reborn into the Spirit world. As companions, they serve as Light Bearers and Caretakers of the departing Soul. The power bestowed to the Feminine is unmatched and feared by many propagating patriarchy.  This is known though suppressed by the system in place that “The Woman was the Original Epitome of the Noble and Sacred in the World.”

It is not for nothing that in Nguni history/mythology we are told that Life emerged out of a Reed (Umhlanga), that the first to emerge was a Woman with a baby on her back. In another region of Africa, we are told Life emerged out of deep expansive waters, and the first to emerge was a Woman with a man on her back! YES…and the first living merciful Deity known to Zulus is NOMKHUBULWANE, the only Daughter of God…the Goddess we get close to, with whom we converse, in front of whom we cry, plead, and sing, for Rain, Who at the end issues the RAINBOW!

Manifesto of a Woman

There is a notion that “History is written by Victors”. I advocate that History must be rewritten and the Truth be Revealed about the Story of Africa and Humankind.

Perhaps, the missing, Greatest, Epic, on Africa and the rest of Humankind, may begin thus:

We are anchored in the knowingness that our thoughts create our own world, and that power lies within us and that cannot stripped from us. In Spirit, We are beyond the grasps of any Man’s vice because in Spirit we are Eternal.  Therefore, nothing is taken for granted for All that manifest itself has its origin in Spirit. In Ubuntu this allows the sacred tree to be planted by the river side, allowing nourishment from the living waters. The Tree knows that it is part of the whole, allowing the living waters to permeate every cell of its being, nourish the whole. The principle of caring for each other’s well-being is promoted, and a spirit of mutual support fostered.  It is the resilience of the tree that enables its being to survive and emerge stronger for the benefit of all despite all efforts to destroy its essence.

Finally as stewards, every deed is carried out with humility and diligence, knowing that it is a service to all beings. It is driven by the belief that do to others, what you will love to be done to you. A person with Ubuntu has a revelation that there is no other, this dualistic view is allowed to exist because of the continual battle the ego hangs on in order to continue planting its deceptive seed that germinates to create all this needless suffering. It is these words of wisdom that were given to the writer by the Ancients Ones, the custodians of ancient ways of being and healing that restores her to destined path when she sidetrack,  “Show me a man my child, I will show you a man who knows himself.” In being truthful to our self, we reveal our rainbow colors. When this colors blend together we radiate with pure white light, an auric field of protection from all negativity.